This is a wonderful Christmas story that Mom has written. I believe that it would make a fantastic children’s book. I just wish I knew how to make that happen. Anyway, please enjoy it and maybe read it to your kids this Christmas Eve. -Leah 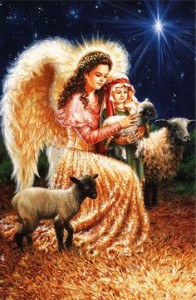 Now this is the story of a very special birth
And a night of miracles when the angels came to earth
It happened many years ago in a village far away
What occurred one special night still amazes me today
My mother had asked God for a son and He sent her me
Matthew means gift from God, so Matthew I would be
But I was born imperfect and this would be my lot
What God had given others, for me he had forgot
Since birth I had been mute, so a word I could not speak
The children all made fun of me, and thought that I was weak
I longed to be like others and talk and laugh and play
But I was too ashamed so I would run away.
I stayed with the shepherds and helped them herd the sheep
The lambs were my playmates and my secret they would keep
Then a strange thing happened one peaceful starry night
As angels appeared to us and bathed the fields in light
The angels were so beautiful and we were so amazed
Their brilliance almost blinded us as we watched in a daze
They told us not to fear them as we trembled on the earth
But on that night in Bethlehem a girl had given birth
To a wee babe in a stable, and we should go and see
But someone had to watch the sheep and that chore fell to me
But as the shepherds rushed away, an angel lingered near
He knew my heart was broken as he saw me shed a tear
He said because of God’s great gift, this night I would be whole
And it would be my destiny to make sure the story’s told
He told me men aren’t perfect, that’s why on this night
God had sent his only son, to earth to make things right
That he had come to teach all people, even you and me
That we should treat each person, as we would want to be
When the Angel knelt and prayed with me, I knew that I had found
My voice that had been locked away, I heard the clear sweet sound
Then they took me to the stable where baby Jesus lay
And I sang to him a lullaby while I knelt down on the hay
Then I was joined by angels and I sang with all my might
The silent sky was filled with song that first Christmas night
It was a night of miracles, the night of Jesus’ birth
When the star shown over Bethlehem and Angels came to earth.

One Response to When the Angels Came to Earth