You probably have never heard his name or have seen a picture of him. Romeo was a sailor working at the Pentagon on Sept. 11, 2001 when the plane hit the building. He was 3 days short of his 24th birthday. His mother got in touch with me after she had read some of my 9-11 poetry and we became friends. I wrote this poem in rememberance of Romeo and all those who died that day. We may not know their names or have seen their faces but we can never forget what happened to them and our country that day. 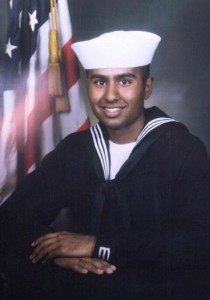 A Tribute to a 9-11 Victim and all the Victims

From the Pentagon to Arlington, his life had been so brief
Now those he loved are left behind still numb with disbelief

His birthday just 3 days away he would always be
This sailor, son and brother forever twenty three

When the planes hit the buildings and death rained from the sky
We stared with tears in horror and we asked each other, why?

As smoke rose from the Pentagon, Old Glory was unfurled
A symbol of our resolve and a message to the world