Beginning with Washington, through history and time
A symbol of freedom in story and rhyme
It was watched through the night by Francis Scott Key
As he penned the words, “Oh say can you see”
Through our country’s wars it continued to fly
On Iwo Jima brave men hoisted it high
Raised on nine eleven midst the rubble and dust
Showing the world that “In God We Trust”
Patriots and presidents, it’s covered their coffin
Over many brave soldiers’ it’s been draped too often
Tri-fold  presented to mothers and wives
In tribute to heroes who gave their lives
It’s been walked and spat on, reviled and spurned
Desecrated and hated, rejected and burned
Those who denounce it don’t realize
Their freedom was given by others who died
To preserve Old Glory they took a stand
So this flag still flies freely all over our land
Each color has meaning, each stripe and each star
And it’s colors grew bolder through terror and war
It’s flown over our country down through the years
It’s fabric was woven with blood, bravery and tears 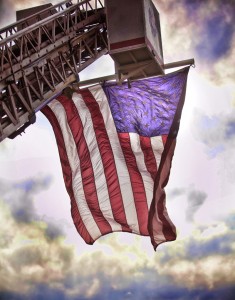 One Response to OUR FLAG