Posted by Leah Savage on July 3, 2017
These are stories of people I knew who served in Vietnam, friends, classmates, relatives.  So many stories, so many lives changed forever.  Their sacrifice is beyond measure, we owe them a huge debt.
Remembering all who served. 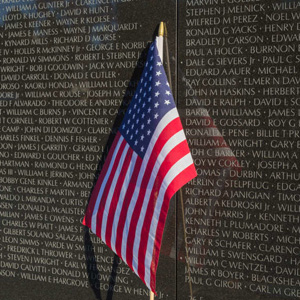 Just a young kid from the Midwest, he had never traveled far
But when his Uncle Sam called him, he headed off to war
He was taught to love his country and to obey the Golden Rule
But the lessons of a cruel war, were never taught in school.
His peaceful life was shattered, feelings he could not explain
He turned to the bottle, trying to erase the pain
He came home to his family but was lost to alcohol
He died long ago in Vietnam but you won’t find his name on The Wall

His partner won the coin toss and it was just his luck
His buddy stayed there with the bomb as he walked back for the truck
When he heard the explosion, he knew he would be too late
He would always remember, that could have been his fate
He never forgot his fellow soldier; how he bravely gave his all
The name of his buddy is now carved in the granite of The Wall

He flew his Huey chopper rescuing the injured and the maimed
Dodging bullets in the battle, his life would never be the same
He still hears the desperate cries, of those he had to leave behind
The horrors that he witnessed will forever prey upon his mind
These grim scenes are revisited every evening at nightfall
Names of those he couldn’t save; engraved in their memory on The Wall

His young son watched the evening news, on their TV each night
If he didn’t hear his daddy’s name then he must be all right
It’s not easy raising little ones, when their dad’s so far way
But she prayed for him daily and for his safe return one day
Families waiting back at home, dreading they might get the call
So many lives are memories etched in the black granite of The Wall